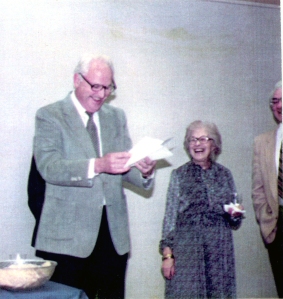 Standing less than five feet tall, she easily commanded the attention of everyone around her with her confident persona. She always honored her commitments, expecting nothing less from employees and professional partners. Owner of North Pacific Supply Company for nearly forty years, Mary Barbagelata “Mary B.” showed up for work every weekday, from the early 1950s to the early 1990’s, until the age of 87.

Born March 6, 1905 in Portland, Oregon, Mary B. was the bookkeeper for the company (located at that time in northwest Portland) when it became North Pacific Supply in 1953. In 1956, a time before women-owned businesses were prevalent, she became the majority owner and slowly bought out her partner to achieve sole ownership.

With Mary B. at the helm, North Pacific Supply became the private distributor for Whirlpool and RCA, which led to expansion into the rest of Oregon and southwest Washington. The company’s prosperous growth allowed for a new 100,000-square-foot office/warehouse complex in Clackamas. It was 1979 and Mary was 75 years old, but that didn’t keep her from actively overseeing the planning and construction. After she passed away, in May of 1995, the ownership of the company passed to Mary’s daughter and granddaughter.

In every endeavor, she personified passion tempered with practicality and competence completely devoid of conceit. At times when someone fell short of her expectations, they could expect to receive a “creative letter” hand-typed by Mary B. from her trusty upright typewriter, reminding them of their obligation. In these ways, she was much more than one of the first female business owners in the Pacific Northwest. She was one of the region’s finest business owners of her time.

Today, North Pacific Supply operates cellular, construction and property-management divisions in addition to its central remodeling business. The company specializes in appliances and cabinetry for kitchens, bathrooms, laundry rooms, closets and much more. The name has become synonymous with quality in Oregon and southwest Washington and prices remain very competitive as the company buys in bulk at wholesale. With two additional locations in Bend and Medford and a showroom with 25 complete kitchen examples at its Clackamas location, North Pacific Supply has the high-end brands and the expert knowledge to easily outshine its regional remodel competitors.